Energy Savings For Your Home:

Energy Savings For Your Home 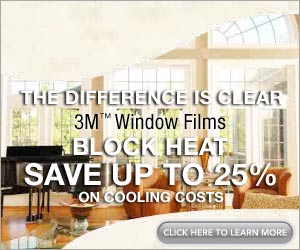 How Much Energy Can I save?

Often over 40% of that cost is for heating and/or cooling. The Windows and doors can greatly affect the cost of keeping your home or office comfortable and energy efficient. Energy saving Window film
can help you save energy on your existing windows or doors… while helping with comfort. This can be installed in your Jacksonville Home or office at a much lower cost than replacing the glass.

Objects hit by sunlight absorb and or retain their visible and short-wave infrared components, increase in temperature, and then re-radiate that heat at longer and longer infrared wavelengths. Glass allows visible light to pass through almost unimpeded, once that light is converted to long-wave infrared radiation by materials indoors, it is unable to escape back through the window. This trapped heat causes solar gain via a phenomenon known as the “greenhouse effect”. The longer wavelengths cannot leave back through the window. In buildings, excessive solar gain can lead to overheating within a space, but it can also be used as a passive heating strategy when heat is desired. So in a Greenhouse, effectively creating the Greenhouse effect is a good thing. In a cooling climate such as we have here in Jacksonville Florida this can create an undesirable situation.

How can All Spec Sun Control save me the cooling energy cost?